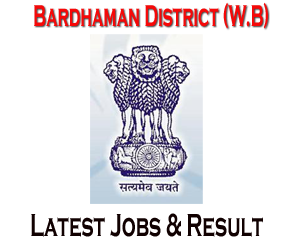 1.All Applications should be first registered in prescribed format along with coloured scanned copy of the  colour  passport size  photograph  (scanned @  100  dpi resolution)  as  available  in the District  Website  www.bardhaman.nic.in.  Registrations  with  incomplete  details & technically improper registrations would be summarily rejected.
2.Registration No. would be the Unique ID of the applicant. No duplicate application would be
accepted.  Only  the  first  registered  application  would  be  accepted  in  case  of  duplicate  applications
3.  The printed  copy of the registered form after online entry  in the district website has to be submitted along with attested copies of testimonials as in Sl. No. 4
4.  The following documents/testimonials hasto be attached
a. Proof of residence from local authorities (Pradhan/ Councillor)/ BDO/SDO/ EPIC/Passport
b.  Proof of Date of Birth – Only Secondary level Admit Card/ Certificate to be accepted
c.  Proof  of  Educational  Qualification  –  All  documents  justifying  essential  &  desirable qualifications
d.  In  case  of  retired  employees  proof  of  employment,  tenure  &  experience  and superannuation from the employer
5.All Applications should be provided with 2 recent colour passport sized photographs (1 affixed on the application & the other stapled)
6. All  applications should  contain the  attested  photocopies  of  all testimonials to substantiate eligibility  in respect  of  Essential Qualifications &  Residence  and  also to  establish  Desirable Qualifications.
7.  Photocopies of all Testimonials and the photographs should be attested by either a Gazetted Officer of Government of India or a Group A Officer of Government of West Bengal
8.Registration would be opened at the District Website from 10 A.M. 12th December 2013 and would continue till 5.30 P.M. on 11th January 2013.
9.  Applications are to be submitted in a sealed envelope superscribed with the Name of the Post Applied for, Place of Posting Applied for & Name of Block/ Municipality & Name of the Sub Division  of Applicants’ residence  against  a receipt without  verification  at the Office of the District  Magistrate, Social Welfare Section on any working day from 12 Noon to 3 P.M. on and from  and 12th December 2013 to 12th January 2014.
10.  Last time & day of registration in district website is 5.30 P.M. 11th January 2014 and last day of submission of hard copy of application is 3.00 P.M. 12th January 2014.
11.  List of Rejected applications along with reasons of rejection & List of accepted applications would  be available in the District Website on and from 10th February 2014.
12.  All applicants whose applications are accepted would have to sit for a Written Examination as
detailed in Item C. and only candidates qualifying in the written examination would be called for
practical examination and/or viva voce.
13.  List of Qualifying Candidates(result) would also be available in the district website.Separate Admit Cards for Practical & viva voce would be available after completion of the procedure of written
examination.
14.  Admit Cards with Date & Place of written Examination would be made available in the district
website from 10th February 2014. Admit Cards with Date & Place of Practical Examination and
Viva  voce would  be made  available  in the  district website to&nb
sp; qualifying  candidates  only  on
completion of the procedure of written examination. No hard copy of admit cards in either case
would  be sent.  Admit  Cards  issued  for  written  examination  would  not  be  considered  for
practical examination or viva voce test. Applicants are requested to regularly visit the district
website for any subsequent information/ updates in this regard.
15.  List  of  Candidates  whose  names  are  made  available  from  State  Employment  Bank  and
accepted  would  also  be  displayed  in the  district  website  from  10th  February  2014.  Such
Candidates would be issued Admit Cards for written Examination through the district website
on production of their registration ID with the SEB. All other  conditions for the process of
selection would be same as in case of applications received through direct advertisement.
16.  All other terms & conditions for engagement would be guided by order of the Department of
Women Development & Social Welfare vide No. 3593(20)‐SW dated 7th November 2013 and
subsequent  resolutions  of  the  State  Level  Steering  &  Monitoring  Committee,  Kanyashree
Prakalpa in this respect.
17.The District reserves the right to engagement and any engagement to any aforesaid post may be
suspended/ postponed at any point of time.
18.  Applicants are liable for prosecution under extant laws for any wrong/ fraudulent/ incomplete
information during application.
Read more details here
Apply Online Here
previous article