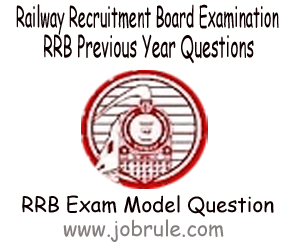 11. Which is the Largest Railway Zone in India ?
a. Eastern

12. The extreme South Railway Station in India is ?
a. Trivandrum

13. Railway Staff College (RSC) is situated at
a. Kolkata

14. A station where a rail line end, is called ?
a. Way Side Station


20. Besides Maharashtra , Goa and Kerala which of the following is the fourth state of Konkan Railways ?
a. Gujarat

21. Where is the Wheel and axle plant of Indian Railways situated  ?

22. Which of the gauges is used in the Hilly areas ?
a. Narrow Gauge

b. Meter Gauge
c. Special Gauge
d. None of these


26. Who acts President of India when neither the President nor the Vice President is available ?
a. Chief Justice of India

27.  When a state Governor dies or resigns , who normally exercise his functions till a new governor is appointed ?
a Chief Minister
b. Chief Justice of the High Court
c. Advocate General of The Court
d.  The President

28.  The First Electric Railway was opened in ?

29. Who is the author of the book ‘ We Indians’ ?
a.  Subramanya Swamy
b. Mulk Raj Anand
c. Khushwant Singh
d. Nirad. C. Chowdhury

31.  Aurobindo was the author of –
a. Discovery of India
b. Hindu View of Life
c. Yogashastra
d. Savitri

33. The Novel ‘Post Office’ was Written by ?
a. Rabindra Nath Tagore


35. Tinanmen Square is located in Which of the following Country ?
a. Japan

To be continued ————— like our Facebook Page to Get all latest Job News , Admit Cards, Syllabus etc on real time. Have a Good Day ?